Quasicrystals as sums of waves in the plane

On the suggestion of a friend, I rendered this animation:

This quasicrystal is full of emergent patterns, but it can be described in a simple way. Imagine that every point in the plane is shaded according to the cosine of its y coordinate. The result would look like this: 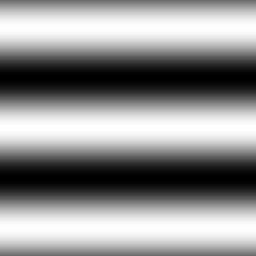 Now we can rotate this image to get other waves, like these: 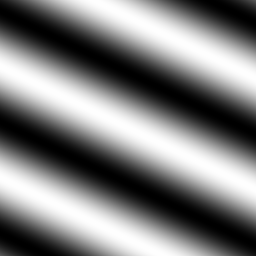 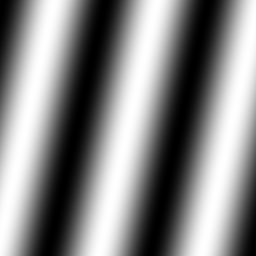 Each frame of the animation is a summation of such waves at evenly-spaced rotations. The animation occurs as each wave moves forward.

I recommend viewing it up close, and then from a few feet back. There are different patterns at each spatial scale.

To render this animation I wrote a Haskell program, using the Repa array library. For my purposes, the advantages of Repa are:

Here is a simplified (but complete!) program, which renders a single still image.

For clarity, we define a few type synonyms:

We'll convert pixel indices to coordinates in the real plane, with origin at the image center. We have to decide how many pixels to draw, and how much of the plane to show.

Repa's array indices are "snoc lists" of the form (Z :. x :. y). By contrast, our planar coordinates are conventional tuples.

A single wave is a cosine depending on x and y coordinates in some proportion, determined by the wave's orientation angle.

To combine several functions, we sum their outputs, and wrap to produce a result between 0 and 1. As n increases, (wrap n) will rise to 1, fall back to 0, rise again, and so on. sequence converts a list of functions to a function returning a list, using the monad instance for ((->) r).

To draw the quasicrystal, we combine waves at 7 angles evenly spaced between 0 and π.

We convert an array of floating-point values to an image in two steps. First, we map floats in [0,1] to bytes in [0,255]. Then we copy this to every color channel. The result is a 3-dimensional array, indexed by (row, column, channel). repa-devil takes such an array and outputs a PNG image file. 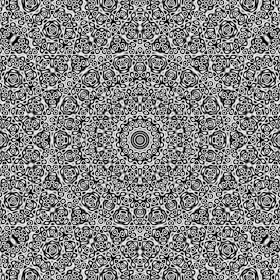 Note that repa-devil silently refuses to overwrite an existing file, so you may need to rm out.png first.

On my 6-core machine, this parallel code ran in 3.72 seconds of wall-clock time, at a CPU utilization of 474%. The same code compiled without -threaded took 14.20 seconds, so the net efficiency of parallelization is 382%. This is a good result; what's better is how little work it required on my part. Cutting a mere 10 seconds from a single run is not a big deal. But it starts to matter when rendering many frames of animation, and trying out variations on the algorithm.

As a side note, switching from Float to Double increased the run time by about 30%. I suspect this is due to increased demand for memory bandwidth and cache space.

You can grab the Literate Haskell source and try it out on your own machine. This is my first Repa program ever, so I'd much appreciate feedback on improving the code.

Be sure to check out Michael Rule's work on animating quasicrystals.